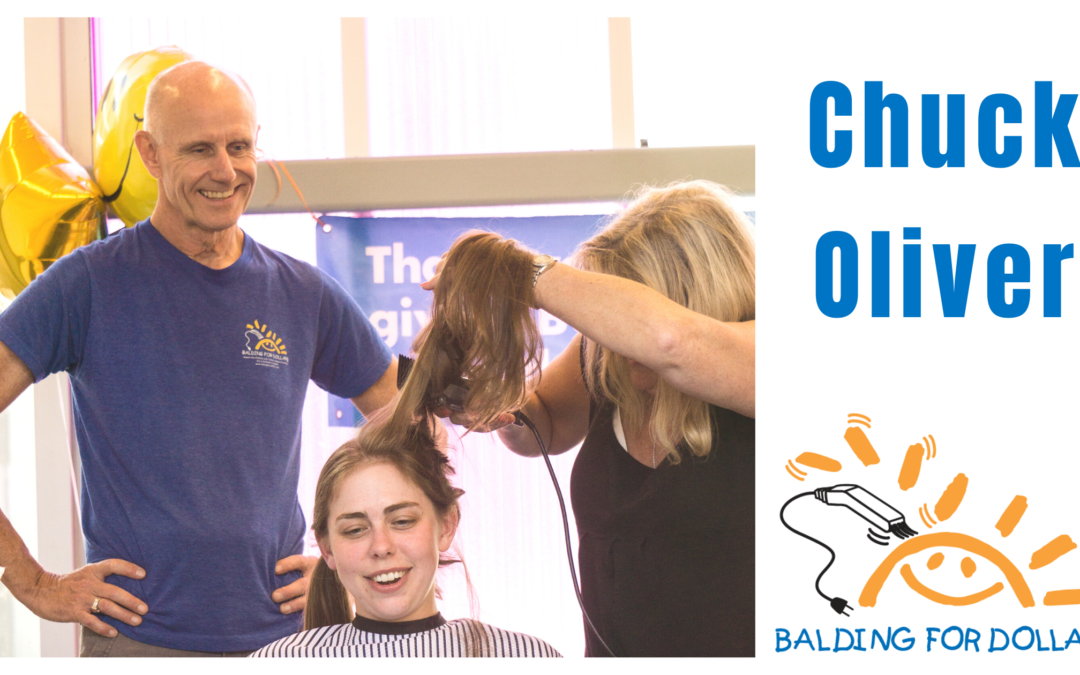 Chuck Oliver is a long-time Balding for Dollars volunteer who we’re proud to have on our team and greatly value his input and perspective on our committee. He has after all, outlasted all of the administrators for years of service! His volunteerism, and big heart has made so many amazing things happen within our programs and for our events, but also has connected him to other causes within this oncology community, which he has lent his strengths and time to as well. We thank you Chuck for all of your commitment, time, and compassion for all that we do. Rumour has it, that he’s been nominated for PHSA’s brand new volunteer recognition award at BC Children’s Hospital this year! We’ll be sure to update with any news on that. Here is Chuck’s story:

“The first time I was aware of Balding for Dollars was about 20 years ago. I coached minor and Junior hockey for over 30 years and every year I always tried to do more than just teach hockey skills but to teach the young men and women about being a good person and to give back to your community. The one year I had an outstanding group of players all about 13 and 14 years old. They were all incredibly polite, respectful and kind. I was speaking with a group of the parents one day explaining that I would love to do something special with them and the one parent turned out to be Diane Distefano, a nurse at Children’s. She told me about Dan Mornar and his Balding for Dollars program. I contacted Dan explaining my situation and if there was anything we as a group could do. He was just in the swing of taking patients and siblings to a day at Playdium at Metrotown Mall. It was a huge building of arcade and fun games. We put together the idea of each of my players adopting one of the patients or siblings as their buddy, paying their way in and spending the day with them. All my players joined in and the day was one of the most incredible memories in my life. The players joined up with their new friends and off they went being kids and having such a great time. We had a room with pizza and snacks for them to come back to and during the time the Sedin Twins along with a few other Canuck players dropped by. I watched with pride how every player stayed with their friends including my own son, Scott. One vivid memory was finding one of my players probably the toughest and biggest player on my team sitting quietly with his friend who was a patient. It was a little girl who wasn’t feeling well and needed a break to rest. I was so proud of my player and still today get emotional thinking of that scene. At the next practice, I asked the room of players what they felt about the day and if they had any comments. One player said it really made him appreciate what he had. He was able to run and play hard all day and to be with someone who couldn’t was a real lesson for him. 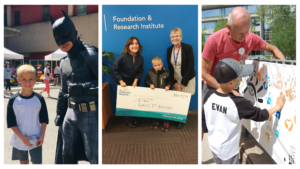 After that day, Scott and I have been proud and honoured volunteers with programs with Balding for Dollars. We always look forward to every main fundraiser we have had with each one run so well because of the incredible organizational skills of Suzanne Dunbar and now with her daughter, Marissa. I made a decision that Balding was MY group and was MY fundraiser and any free time or money I had was going to the cause. Every year I am easy to shop for birthday or Christmas presents as the only thing I want is a donation to Balding. Each fundraiser is unique and one year I was asked to help with the shaving. Of course I was only qualified to do the “buzz” cuts and I had one father come up on stage carrying his little boy who was a patient. I began cutting his hair and then offered the little boy to use the clippers on his Dad. They were both enjoying themselves so much. I asked the Dad if it would be ok if I held him so he could do the back of his head and the look I got from the father was one of him giving me the most precious possession he has ever owned. Another memory I will never forget. 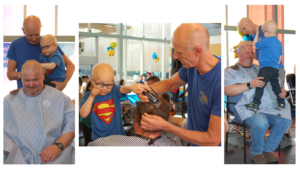 The board had a program to give Mom’s a break from their busy and distracting lives and allow them to get together to share their journey’s and help them relax and heal. I felt that Dad’s needed the same thing. I work part time at Lee Valley Tools in Coquitlam and went to my store manager, Larry Evans and presented him with an idea. We have a seminar/shop room where we do woodworking seminars and classes. I asked him if there was any way we could offer Balding the room for a part of a day for Dad’s to come by and build something. Larry without hesitation told me that we could have the room for as long as we want, as often as we want and I could offer up anything. Needless to say I was very touched.  Suzanne got to work collecting some Dad’s whose child was at Children’s who would be available and one Saturday we had a wonderful group of eager woodworkers arrive at Lee Valley. Included with the group was Dave Dunbar, Suzanne’s husband a skilled woodworker in his own right but also a great facilitator. He was able to move around the room during the day and talk quietly with the Dad’s about their journey. Most were new to woodworking but all ended up making fantastic folding camping stool/ table. We had a lunch and Suzanne even presented each with a goodie bag. It was a fantastic day for me and again, without the help of Larry wouldn’t have happened. We look forward to doing many more in the future. Larry has now helped again by donating a number of toys and cutlery from the store for Balding to distribute to the patients and their families. 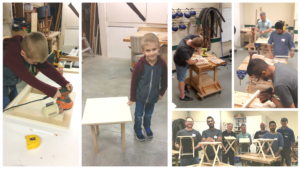 I feel I have been given so much from Balding for Dollars. From the wonderful feeling of doing my small part on an incredibly talented team to meeting the most incredible people. The young adults who come back to the main fundraiser to volunteer who themselves spent a lot of their youth in the hospital. People like Diane Distefano and Kristina Jackson, 2 of many who I call Angels on Earth. They come to work each day to help patients who are undergoing frightening procedures and trying to make these young children’s lives as normal as possible. People like Suzanne and Dave Dunbar who know the pain of losing a child to cancer but yet continue to help others with their own journey. People like Christine Tulloch who fought Leukemia 3 times and lost the final battle. Watching her positive attitude even though she was battling her own pain every day. These people and the experiences I have had being part of the Balding for Dollars team have made me appreciate what is really important in life. 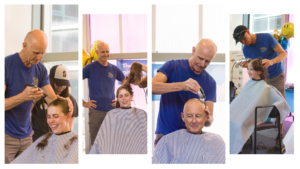 I have seen my son Scott become involved and appreciate the opportunity. He mentioned to me once that how he has learned that giving your time to a cause is just as important as giving your money. My one grandson a couple of years ago told his Mom he didn’t want his friends to give him gifts for his birthday but wanted them to donate to Balding for Dollars. They did that and he proudly came down to the hospital and handed in his donation. He also helped me build a table for the playroom at the hospital and was quite proud of it when he came down for a visit. My young granddaughter who is growing her hair and collecting money for Balding makes me so proud. Thank you Balding for Dollars for all you do and for what you have done for me.”

You can donate to Chuck’s Granddaughter’s ongoing hair cut fundraising campaign here, which will occur on June 12th. Donations will be accepted through the rest of 2021.