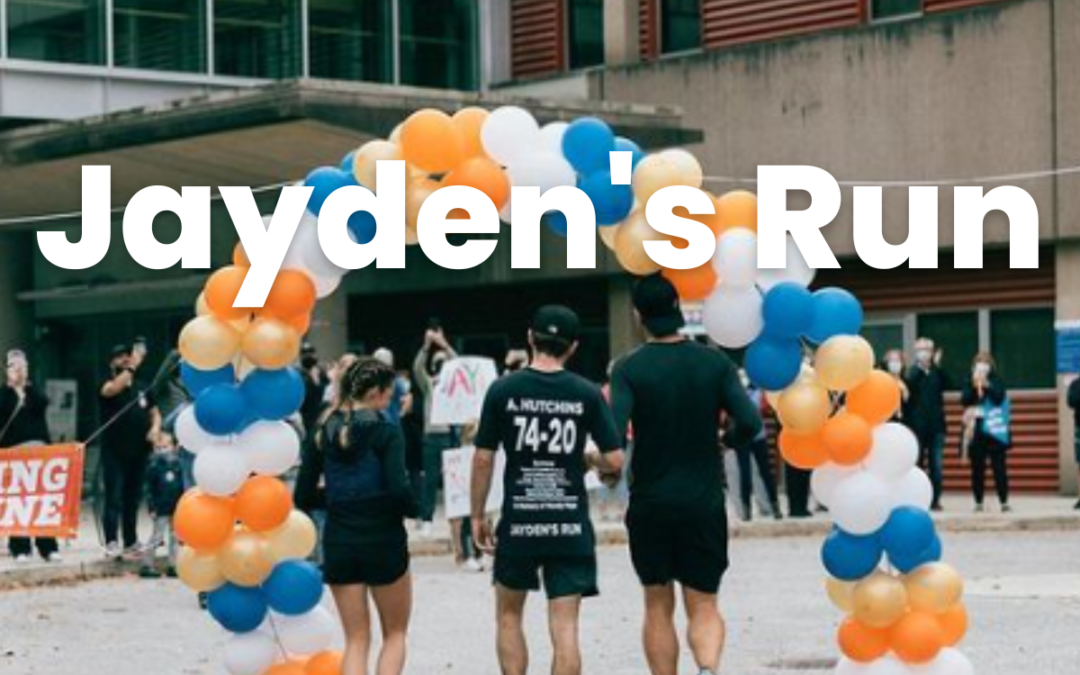 One year ago today Jayden’s Run was well underway and the impact is still rippling through the oncology ward and the BC Children’s Hospital Foundation.

Let’s take a look back at what led up to this monumental event, the incredible run, and the successful aftermath.

Jayden approached the foundation many months prior with a crazy idea, and the idea also got passed on to our patient and parent advocate in oncology Suzanne, who then looped me in on this idea to see how we could garner some support in the oncology community. 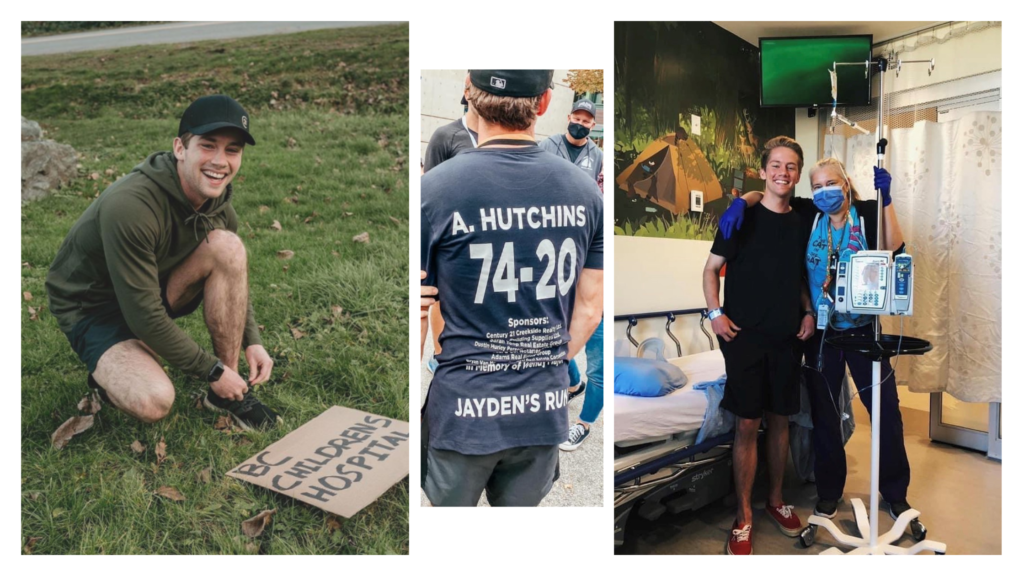 Jayden wrote to us:

“I am a past oncology patient at BC Children’s Hospital. Diane was my nurse clinician… Anyways, the reason I am reaching out is because I am not sure if you heard about my marathon fundraiser to the hospital or not. I have been wanting to do something for Children’s for a long time now, and at the end of 2020 I came up with this idea. On October 2nd, 2021 I will be running from Chilliwack, to BC Children’s Hospital in Vancouver, a total of 107km, to raise money for the hospital. I chose to do this run because BC Children’s Hospital has a special place in my heart as I was a patient there in my teens. On January 28th 2015 I was diagnosed with Acute Lymphoblastic Leukaemia and started my 3.5 long journey with Cancer and Chemotherapy. I have been training since January and recently did my longest run of 60km to Langley so I am feeling very confident!  I will be leaving Chilliwack at midnight on the Friday (technically Saturday) and running through the night with hopes to get to BC Children’s around 12/1pm in the afternoon on the 2nd.

As crazy as it sounds, having cancer was the best thing that could have happened to me. My experience gave me a whole new appreciation for life, and I wouldn’t be the person I am today without it. Since finishing chemo I’ve realized there is so much more to life than what I had originally thought. The journey made me thankful for the small things people take for granted each day like the outdoors, after being in a hospital room for weeks with no windows. Thankful for my immune system, after having to go out always wearing a mask before Covid was a thing. Thankful for being able to go school, after being stuck in a hospital bed wishing I was there with all my friends. Thankful for hair, after mine fell out. Thankful for food, after having zero appetite. And finally thankful to be able to wake up and live another day. Whenever I am having a bad day, or I’m upset about something I look back and think of those times and tell myself to start focusing on how great I truly have it right now. There are kids in the hospital right now, thinking those same thoughts, and that’s what this run is about. Showing them that tough situations don’t last long, tough people do! I want to share my story to help encourage others to not only set goals for themselves, but that we can do anything we put our mind to, make change, and be better. I want to do that, and I am going to do that.

My goal is to raise $121,000 to donate to BC Children’s Hospital. My good friend Cameron Van Klei will be joining me on my run, and with support from my family, friends and my whole Century 21 family. So follow along our journey as we run to the place that saved my life and so many others!” 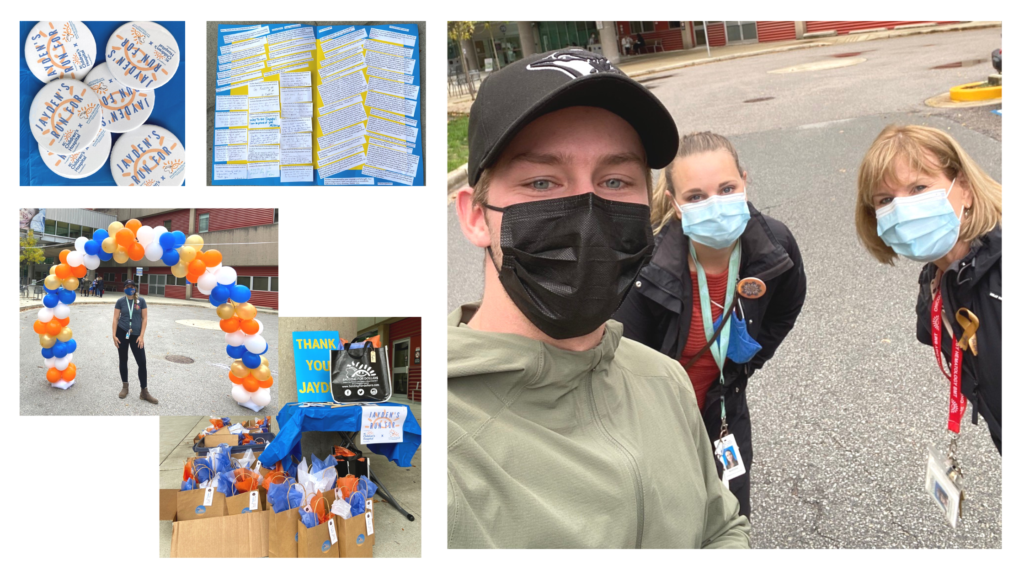 We knew right away we wanted to support any way we could and be there cheering at the finish line of course. At this point we were able to meet up with Jayden in person, do a walk about of the hospital grounds to discuss the final leg and route he wanted to enter, and also get the hospital’s approval in a strict Covid time- which we pulled some strings (and hearts no doubt) and got the okay. This allowed for much deserved media presence and a small crew of supporters awaiting him at the finish line. Jayden was very clear he wanted these funds to go to oncology specific initiatives and that Balding would be a part of that. 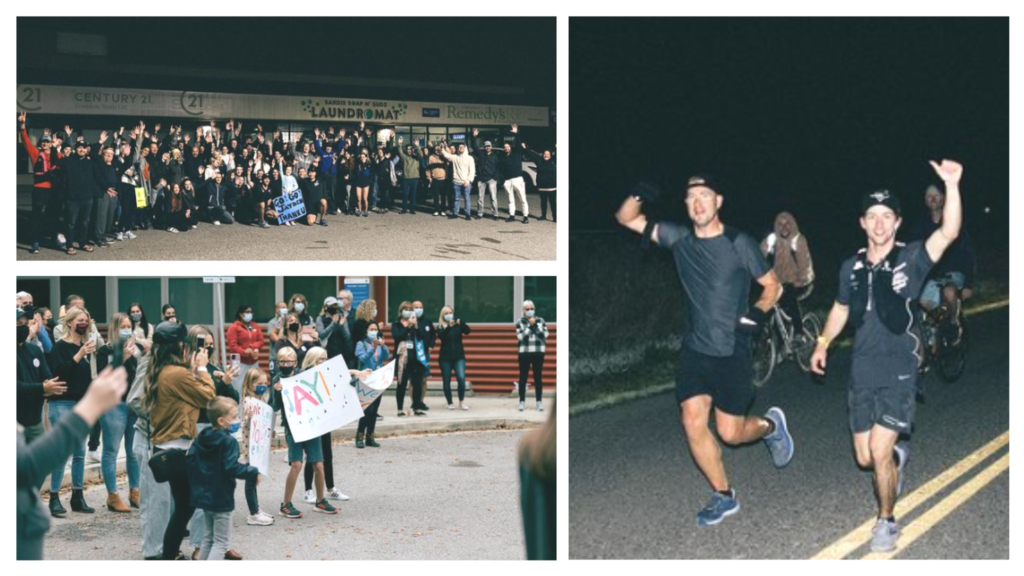 With a crew at the starting line and many following in bikes and vehicles helping them refuel, giving words of encouragement, and at times silent support the run began with a bang. For those who don’t know, 107KM is the equivalent of running 2 1/2 marathons straight- an amazing physical, but also majorly mental feat that most of us folks won’t attempt in our lifetimes. Social media updates were made along route as the buzz grew and donations continued to roll in.

Balding for Dollars was there setting up the finish line early on the 2nd with banners, a beautiful balloon arch, and gift bags for the runners and all the amazing support crew full of water, goodies, some Balding swag and a Jayden’s Run supporter button to wear. There were about 50 family, friends, and a few oncology families in the crowd masked & distanced to cheer him to the finish line. We also surprised Jayden upon entering the hospital grounds, with some posters of past oncology patients photos which included words of encouragement every few feet on the final loop to the finish line. 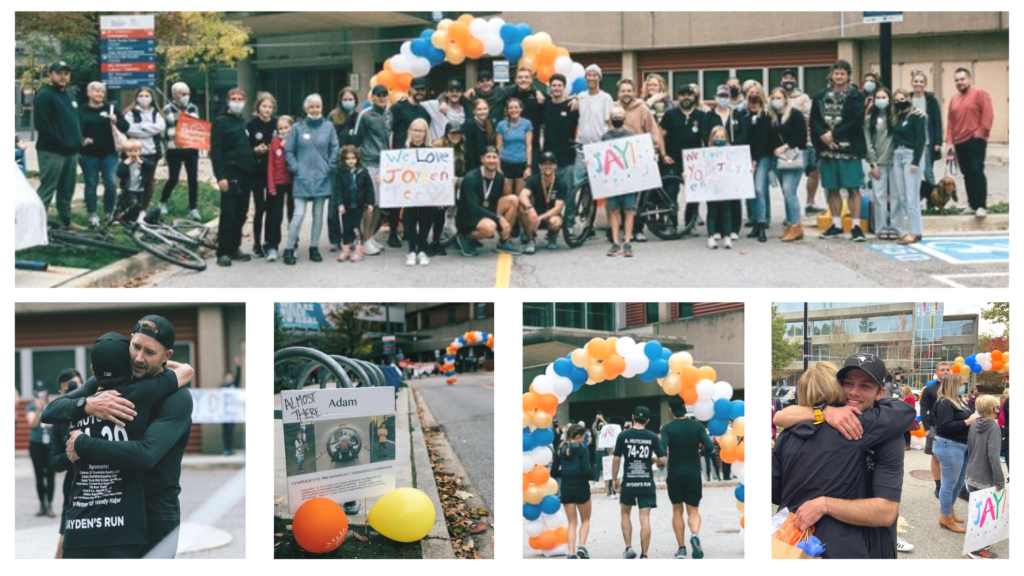 The vibrational buzz could be felt, and the emotion everyone was holding was palpable while we waited. This was such a unique experience many of us might never witness again. Seeing Jayden and his crew that balloon arch finish line was incredible. The tears, hugs, and pride shared was amazing to witness and Jayden graciously took the time to speak to the media, take photos, and meet some proud patients who looked up to him. He even walked around to see a patients words of encouragement pasted up on his window from the 8th floor. 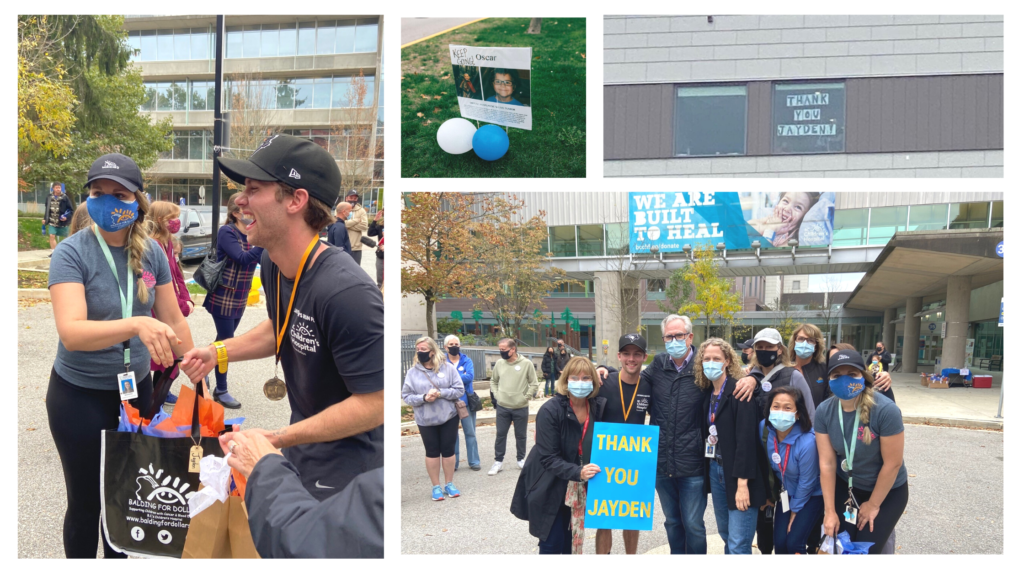 By the finish of the run he had reached his $121,000 goal and ultimately raised an incredible $125,367.72. Jayden split his fund over 3 amazing oncology initiatives at BC Children’s Hospital which included research, child life, and Balding for Dollars. We are so grateful for the $40,000 donation made and totally humbled by this amazing young man and his crazy idea. We’ve certainly Kept Jayden close in our pockets as he’s always willing to jump up to speak at future events and volunteer his time. We can never say it enough, but Thank you Jayden! 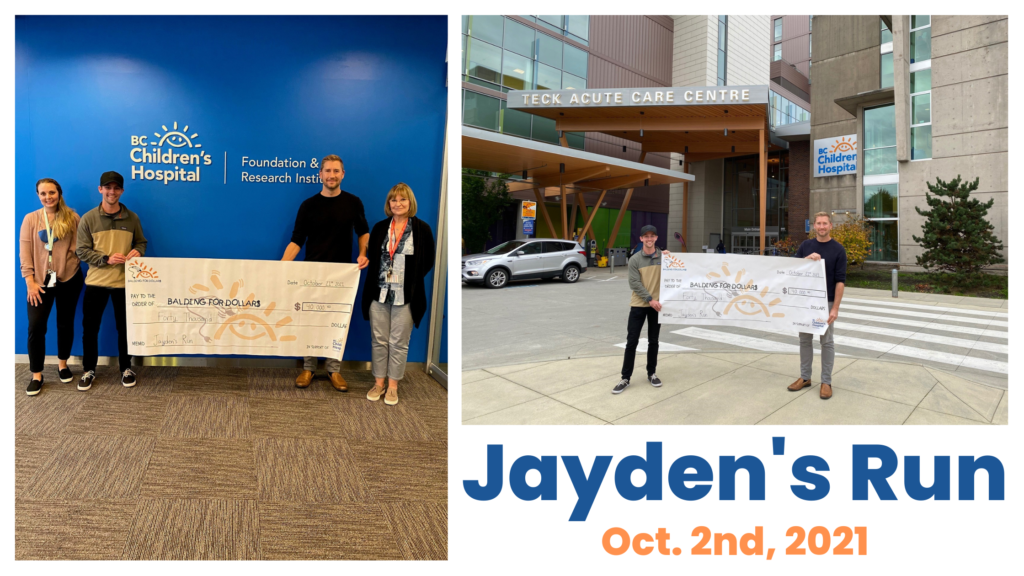 Jayden’s words as he reflected on his journey:

This past weekend was something I’ll remember for the rest of my life, and was by far the coolest thing I have ever been apart of. Ever since I got cancer in 2015, I always wanted to do something to give back to BC Children’s Hospital and with the support of each and every one of you, we did much more than that. Yeah we raised a lot of money, yeah we ran a long distance, but what was best of all was we got to give those kids at BC Children’s Hospital hope. Hope that things really do get better, and hope that if you set your mind to it, you really can do anything you put your mind to and make a difference in this world.

Before this year I never ran more than 10km and thinking I was going to run over 100km scared the crap out of me. But I think it’s important in life to do things that are out of your comfort zone and scare you because that’s how you grow. I never knew I was capable of running 100km, but I do now and I grew a lot as a person along the way. I feel like I was given a second chance on this earth and to use my story to help others. I want to still keep writing my story and not stop at what I have done so far. This is only the beginning and I feel like this is what I was meant to do.

The amount of support Cameron Vanklei and I received this year was unbelievable. It would take me hours to thank each and every person, who donated, supported, sent kind words, etc. So just know that I am so very grateful for each and every person who was apart of this and made this possible. I have so many great people in my life.

Life is short and can change in a second, so go out there, get out of your comfort zone and make every single day count.